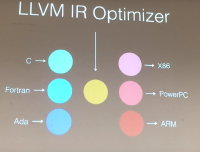 What do you want to make the computer do?

101
what going on here
the survey course

Thou shall be constructive Thou shall not be a jerk

A language empowering everyone to build reliable and efficient software. Write code for perpetuity

C is like playing with knives, C++ is juggling flaming chain saws

How far does rust SAFE extends?

Why is there a crab for rust? , mascot

How to keep track of security vurnabilities in libraries you are using? To make sure your program is secure? I wanted to write a socket, I spent good 30 mins time, where am I not looking? Rust for embedded?

Why does the println! function use an exclamation mark in Rust?

How to expand macros in rust?

Using shell scripts is fine when you’re using their strengths

The LLVM compiler infrastructure project is a set of compiler and toolchain technologies,3 which can be used to develop a front end for any programming language and a back end for any instruction set architecture. LLVM is designed around a language-independent intermediate representation that serves as a portable, high-level assembly language that can be optimized with a variety of transformations over multiple passes.

how a code gets converted to machine code

extern keyword
The extern keyword is used in two places in Rust. One is in conjunction with the crate keyword to make your Rust code aware of other Rust crates in your project, i.e., extern crate lazy_static;. The other use is in foreign function interfaces (FFI).

Strive to write software that can survive in perpetuity

What is a Software? Can axel arounf your definition of s/w

I want to build permanent s/w that outlives me, not beacuse I lan to walk in the traffic tonight

We can change the world with code